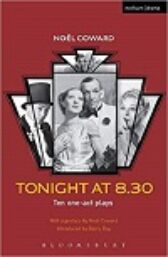 First performed in 1935, the plays perfectly showcase Coward's talents as a playwright and his trademark panache for sparkling, sophisticated, witty dialogue

The short form also exhibits Coward's versatility with themes that range from comical farce to dark satire, played out in plots about mistaken identities, unconsummated affairs and love at first sight

This edition also features Coward's own preface and an Introduction by Barry Day, editor of The Letters of Noel Coward

"Everywhere emotional confusion breaks through some very English surfaces. Everywhere people are trying to keep the lid on unruly feelings, using everything from stiff upper lips or consideration for others' feelings to threats, moans and bully-boy tactics, and everywhere those feelings end up boiling over" ~ Benedict Nightingale, The Times

" ... they continually prove that Coward was blessed with much more than a talent to amuse" ~ Charles Spencer, Daily Telegraph