Tongue, Tied And Other Short Plays 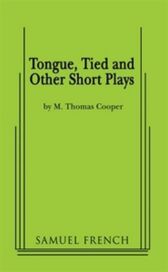 The eight 10 Minute Plays in this Collection are ...

Tongue, Tied - M1,F1 - A man and a woman fall in love through their hand puppets

Clowns(s) - M4,F1 - A children's clown, possibly on the run from the law, bemoans his fate and falls in love with a mother of one of his clients. She convinces him that he might be happier if he becomes a normal person and just does clowning on the sly

Skirmishes - M3,F3 - A man and woman argue at a picnic while ants wage battle and romance around them

The Abduction - M1,F1 - A couple plays drinking games in a field, waiting to be picked up by aliens (which they are)

Natural Selection - F3 - Three soccer moms display their different approaches to mothering with the manner in which they encourage their children (two of whom are ruthless, the last of which is training her son to be a saint and actually turns out to be the most ruthless of all)