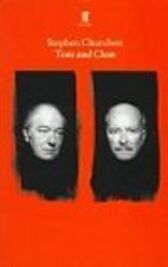 It's July 1945, and Clement Atlee arrives in defeated Germany for the Potsdam conference with Stalin and Truman . . .. Tom & Clem explores the nature of personal and political compromise in the context of events which were to shape a country and continent in the twentieth century

A newly elected, pragmatic Labour Prime Minister must unite the party behind his vision of socialism and resolve the European crisis after World War Two. But first he encounters his most flamboyant MP, Tom Driberg, a radical journalist and bon viveur. Can there be a true meeting of minds with Tom distracted by the attentions of a handsome young Russian soldier, and Clem occupied by the outbreak of the Cold War and the novels of Dorothy L Sayers?

Stephen Churchett's play examines the tension between liberty of conscience and totalitarianism, in the context of events which were to shape a country and continent in the second half of the twentieth century