To Sir With Love 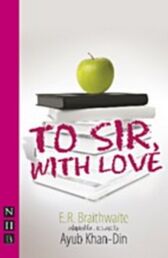 Large Mixed Cast
An uplifting story of the triumph of love, inspiration and hope against all odds, laced with the song and dance of austere, 1940s Britain

Ricky Braithwaite, an ex-RAF fighter pilot and Cambridge graduate, arrives in London in 1948

Taking the only job he can get, Ricky begins his first teaching post, in a tough but progressive East End school

Supported by an enlightened headmaster, the determined teacher turns teenage rebelliousness into self-respect, contempt into consideration and hate into love

And on the way, Ricky himself learns that he has more in common with his students than he had realised

Made into a major film in 1967 starring Sidney Poitier, this new stage adaptation is peppered with the songs and dance of the late 1940s

" ... a clever re-working... beautifully judged with warmth and a lot of humour" ~ British Theatre Guide