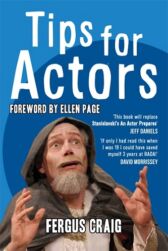 "This book will replace Stanislavski's An Actor Prepares" ~ Jeff Daniels

In the most important theatrical book of this or any other decade, Tips for Actors gives you all the advice you need to take your acting to the next level

And who else but Fergus Craig would come up with such transformative advice as ...

The answer is no one

"If only I had read this when I was 19 I could have saved myself three years at RADA!" ~ David Morrissey

"What sort of person would be an actor? What kind of tragic empty husk of a human being would rely on pretending to be someone they're not for the amusement of strangers? Find out inside!" ~ Al Murray