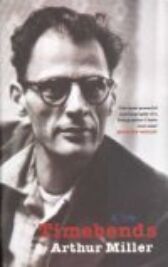 The autobiography of the man who wrote Death of a Salesman, View from the Bridge and The Crucible - the man who stood against Senator Eugene McCarthy's witch-hunting House of Un-American Activities, the man who was married to Marilyn Monroe, the man who many consider to be America's greatest living author

Timebends follows the tangled but exciting course of Miller's life from his upbringing in New York during the Depression, his growth during the hope of the New Deal years, to his first attempts at writing, on to his triumphs as America's top playwright, to his work in Hollywood and beyond as an author of great popular appeal

In frank detail, he speaks about his life and passions. He goes into considerable length about the many controversies which have surrounded his work and his battles against prejudice and international injustices

Miller's memoir gives us a sure sense of why Arthur Miller is considered to be a great moral force unto himself. This volume is illustrated throughout with unique family photographs

"A book and a half. Arthur Miller is a very rare bird; a truly independent man. His autobiography is a beautifully structured narrative: tough, very moving, a political testimony of considerable force" ~ Harold Pinter