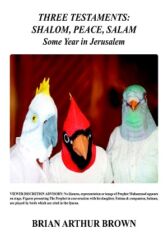 It opens as Muhammad, daughter and friend discuss failures of Abraham's family to find a way to live in peace

To prevent Muslim distress over prophetic figures appearing on stage, these characters are presented on stage as birds

In the second scene, the birds fly us back to Israelite exiles around a campfire in Scythia in the sixth century BCE

And in subsequent scenes, the birds take us to events in Babylon, Jerusalem, and Spain of the tenth century CE