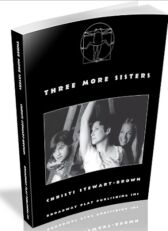 From the Bronte sisters to the Brady Bunch sisters, Three More Sisters takes a fantastical ride through the pangs, clashes, and ultimate endurability of sisterhood

Simple set - runs about 60 minutes without an Interval

"While it might be politically correct to classify Three More Sisters as a "women's drama", let's just call it great fun. This sixty-minute comedy-drama will appeal not only to sisters but to anyone who has felt the pains of sibling rivalry, including those who have escaped into adulthood ... As a bonus, Three More Sisters will introduce young performers and their audiences to a number of theatrical allusions - from Shakespeare to The Brady Bunch. It's quite a stretch, but it works This is a demanding play, calling for a great variety of dialects and emotions ... and features three gem roles for women" ~ Dan Blegen, Dramatics Magazine