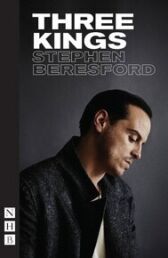 When Patrick is eight years old, his absent father returns unexpectedly for a brief but memorable encounter

Years later – recalling that meeting, and the revelations that followed – Patrick traces the events of his father’s life, laying bare a journey of grandiose plans, aching disappointments and audacious self-delusion

Three Kings by Stephen Beresford is a heartbreaking and hilarious play for a solo actor about fathers and sons, the gifts and burdens of inheritance, and the unfathomable puzzle of human relationships

It was written for Andrew Scott to perform as part of Old Vic: In Camera, a series of live performances streamed from the Old Vic Theatre, London, in 2020

This edition includes an introduction by the director Matthew Warchus

'A penetrating play about toxic fathers and sons ... until it becomes heartbreaking, Beresford’s script is nasty fun' ~ New York Times

'A superb monologue – short, sharp, unsettling and upsetting... though easy and colloquial the writing has the intensity of a Greek drama, suggesting how damage ricochets down generations... in its rich mix of light and shade it's almost a male correlative to Fleabag' ~ Telegraph

'A tour de force ... Beresford's play [is] a mixture of longing and despair, the constant flickering hope that things will be different, the crushing realisation of disappointment. His writing is precise and fluent, catching each mood as it swims swiftly by' ~ WhatsOnStage

'A measured and meticulously crafted tale of fathers and sons, with by moments of sharp humour' ~ Guardian

'While the subject matter is dark and the content often heartbreaking, there are also elegant moments of comedy scattered lightly at the most perfect times – but when those painful moments do hit, they hit you hard and unexpectedly' ~ Broadway World