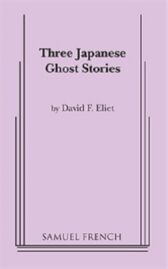 The Vampire Cat of Nebeshima

The first presents a Shinto perspective of the spiritual dimension of Nature itself ...

... depicted in the form of a large cat who not only consumes humans, but then supernaturally changes its form to become that human, after which it interacts and easily deceives everyone it encounters

Until, that is, a world-wise roaming priest enters the picture ...

Once, long ago, a fisherman by the name of Urashima took his boat out to sea ...

He is entranced by the utter beauty of the place, and with Enshun

But as time wears on, he misses home and decides to return

To his horror, he discovers that hundreds of years have passed

In death, she and her maid devise a devious plot to haunt him in an attempt to bring him into the realm of death with her

Despite his servant's warnings that he is bewitched, eventually, the ghost succeeds and overcomes the samurai