Threads of Time - A Memoir 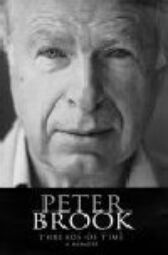 The theatre's greatest contemporary director tells the story of his life

Peter Brook is the modern stage's greatest inventor. For over fifty years he has held audiences spellbound with his critically acclaimed productions. Now he has finally written an account of his life

Born in 1925 in London, at twenty-one Brook became the enfant terrible of British theatre directing major post-war productions of Shakespeare at Stratford-upon-Avon, opera at Covent Garden and new plays in London's West End. He even made films

In 1964 he produced Peter Weiss's Marat/Sade for the RSC and his whole approach to theatre because radicalised. Throughout the 1970s and 1980s Brook began exploring the roots of non-Western theatre which once again changed his view of what theatre could be for actors and audiences. His journey took him to Paris where he founded a company at the Bouffes du Nord theatre where he still works today

Brook's biography charts all the stages of his aesthetic and spiritual journey, and touches on all parts of a career that has been widely reported but never talked about from his own point of view

"First there was the master conjurer adept at musicals, farces, opera and Shakespeare. Then there was the philosopher-king ... who has devoted his energies to a quest for a theatre that was simple in form and rich in meaning" - Michael Billington