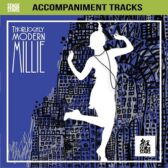 Vocal & Backing Tracks to 18 Songs from the Broadway Musical

Based on the 1967 film of the same name, Thoroughly Modern Millie, opened on Broadway in 2002, and went on to win six Tony Awards and five Drama Desk Awards, including Best Musical for both

A wealthy and naive new arrival

A smart, ambitious and dashing executive

A glamorous actress and singer

A couple of Chinese immigrants

And you have a show that has become an audience favorite, spawning several national tours and an enormous amount of high school productions

Each of the songs appears on the album twice

Not For the Life Of Me

Not For the Life Of Me (Tag)

How the Other Half Lives

Not For the Life Of Me (Reprise)

What Do I Need With Love?

Only In New York

Forget About the Boy

Ah! Sweet Mystery of Life/Falling In Love With Someone

I Turned The Corner/Falling In Love (Reprise)

Long As I'm Here With You