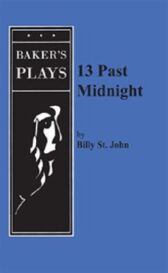 When powerful millionaire Victor Winslow, producer of a popular TV soap opera, invites members of the cast and crew to his mansion for a party, none dare refuse

But before the game begins, the host gives the players ample motives to want to kill him - for real!

But the game becomes deadly when Victor is discovered stabbed in the neck with a dart, and Pete Griffin, a private investigator hired to act as a consultant, must try to trap the murderer before he or she can strike again

Filled with laughs and chills, Thirteen Past Midnight will make your audience think twice before accepting an invitation to a murder mystery evening!