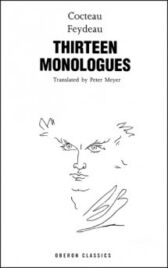 Although a minor part of Cocteau's output of films, plays, poems and ballet scenarios, these exquisite miniatures remain a fascinating form of his dramatic expression

Georges Feydeau (1862-1921) is best known for his enduring farces, such as A Flea In Her Ear, yet he wrote over 20 monologues for actors to perform at charity concerts and in fashionable drawing rooms

Peter Meyer's translations of eleven of these monologues were commissioned by the BBC and performed by leading actors including Eileen Atkins, Jill Bennett, Richard Briers, Judi Dench, Alec McCowan and Timothy West