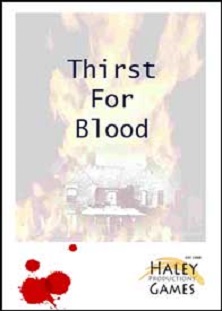 It was one year ago tonight, at the very stroke of midnight, under a full harvest moon, that a fire broke out at the Bates Mansion situated next to the historical cemetery at the edge of town

Witnesses to the fire say they saw the mansion spontaneously combust into a terrifying ball of fire and, as it burned, they saw distraught ghostlike beings fly out of every window, wailing in terror

Today the Bates mansion still lies in ruin at the top of that hill - an eerie reminder of that tragic night and of the curse that seems to hover over this town ...

8 PRIMARY SUSPECTS (they will have full knowledge of the mystery & be given a complete script):

GRACE PEABODY: Reclusive and eccentric occultist who's come out of hiding to warn Devil's Gulch that something evil is about to happen again. She'll do everything in her power to stop it

LESTER DANVERS: Folks around here call him 'Simple' Lester because he hasn't been the same since he almost died in that awful fire last year. He seems to have a big crush on Lucy

LUCY CABOT: A woman who devotes too much time to her career as a writer for the 'The Probe' newspaper as she searches for someone to mend her broken heart (her fiancé was lost in that tragic fire). She's hoping that man will be Peter

HELENA WASHINGTON: She's domineering, powerful and very much a nag to her husband, George. Oh, and Peter Parker is the bane of her existence

MAYOR GEORGE WASHINGTON: George is very proud of the fact that he was named after our first president and considers himself comparable to his namesake. Truth is, he needs to prove himself a man, especially with his wife

PETER PARKER: The wealthiest man in town with the bad boy reputation. This man always gets what he wants and he wants the Bates' property so he can build a large mall and wax museum!

INGRID BATES: Norman Bates' alleged long-lost aunt who has come to Devil's Gulch to lay claim to the mansion

DR. LUDWIG VON HERRING: He investigates the unusual and the unexplained and plans to use the mansion as a center for the paranormal

Clinton Bush: A slick and smarmy know it all running for mayor against George. He enjoys the game he's playing with George who he clearly thinks is a weak leader and forgettable sort of human being. George needs to prove him wrong

Penelope Parker: Peter's ex-wife. She's here to make sure she gets what's coming to her from her miserable ex-husband

Winston Cupp: Peter's lawyer. He can run interference for and support Peter. Cleo Lane: Grace's apprentice who helps her with her exorcism/séance

Renfeld: Ludwig's enthusiastic assistant who can't do enough for his mentor. You can also include: Relatives of the primary suspects or of the men who died in the fire. Supporters of the Paranormal Center. Supporters of keeping the land as it is and keeping the cemetery where it stands. The owner of "The Probe", the newspaper that Lucy works for