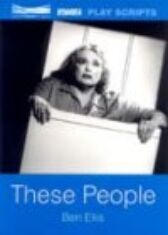 'The whole country needs its stomach stapled. Too many people. It's bursting with struggles and languages and obesity. That's what border protection is about. A national diet. We were unhappy ... maybe we still are, but thanks to border protection we are more confident. Smaller.'

How do Australians deal with the cultural discomfort engendered by the country's treatment of refugees? In These People, the lives of a privileged nuclear family are juxtaposed against those of a family living behind the razor wire. And then there are the penguins...