There Are No Secrets - Thoughts on Acting and Theatre 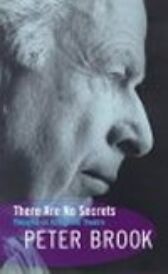 Peter Brook is the most consistently innovative director in Western theatre. In these three essays he returns to the concept of his first book The Empty Space and examines what that means for the life of a production

How can a company establish its own "empty space" - a rehearsal and performance environment which will encourage the actors to abandon the security of the hackneyed and release their true creativity ?