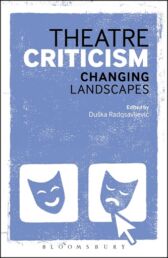 The world of theatre criticism is rapidly changing in its form, function and modes of operation in the twenty-first century

Even though the blogosphere has garnered suspicion and hostility from some mainstream newspaper critics, it has also provided significant intellectual and ideological challenges to the increasingly conservative profile of the professional critic

This book features 16 commissioned contributions from scholars, arts journalists and bloggers, as well as a small selection of innovative critical practice

Authors from Australia, Canada, Croatia, Germany, Greece, Italy, Latvia, Russia, the UK and the US share their perspectives on relevant historical, theoretical and political contexts influencing the development of the discipline, as well as specific aspects of the contemporary practices and genres of theatre criticism

The book also features an introductory essay by its editor, Duka Radosavljevic

I Contexts and Histories of Theatre Criticism

Valda Cakare - The Problem of Reliability: Theatre Criticism in Latvia

Savas Patsalidis - From the Uncritical Certainties of Modernism to the Critical Uncertainties of Postmodernism: Reviewing Theatre in Greece

Margherita Laera - How to Get Your Hands Dirty: Old and New Models of 'Militant' Theatre Criticism in Italy

Vasco Boenisch - What German Theatre Critics Think and What Their Readers Expect: An Empirical Analysis of Misunderstandings

Mark Fisher - Do They Mean Me? A Survey of Fictional Theatre Critics

Mark Brown - Between Journalism and Art: The Location of Criticism in the Twenty-First Century

Maddy Costa - The Critic as Insider: Shifting UK Critical Practice Towards 'Embedded' Relationships and the Routes This Opens Up Towards Dialogue and Dramaturgy

Michelle MacArthur - Crowdsourcing the Review and the Record: A Collaborative Approach to Theatre Criticism and Archiving in the Digital Age

Alison Croggon - How to Think Like a Theatre Critic

Megan Vaughan - Teh Internet is a Serious Business