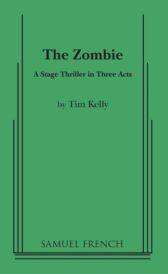 In a decayed mansion dripping with cobwebs and mystery, a former carnival hypnotist calling himself Baron Samedi and a crooked sheriff have developed an "unusual" business

They turn illegal immigrants, petty criminals and intruders into zombies and lease them out as farm laborers

Profits and success aren't enough, however

And the hypnotist wants revenge against those who have wronged him in the past ...

Soon the house is shaking with thrills and shivering shocks

And a startling climax

For the young television producer and his two girls friends who stumble onto the grim proceedings, it's a night to remember especially when they encounter "The Walking Dead"

Despite the goosebumps, this chiller is loaded with genuine comedy and keeps its audience in a state of taut excitement and laughter

The roles are fun and production needs are simple

"A spirited chiller .... Compares most directly to that cult favorite The Rocky Horror Show but without the freaky flamboyance" ~ Daily Citizen, Tucson