The World of Tennessee Williams - Revised and Updated 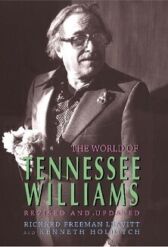 Kenneth Holditch, who has undertaken the task of completing the text, was a friend of Leavitt's and knew Tennessee Williams