The Wizard of Oz - CD of Vocal Tracks & Backing Tracks 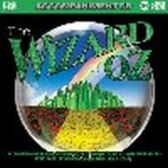 And if you have a karaoke machine, the lyrics will magically appear on-screen as it's also CDG compatible

If I Only Had a Brain

If I Only Had a Heart

If I Were King of the Forest

Winkies March / Over the Rainbow (Reprise)

Ding Dong, The Witch Is Dead