The White Rose and the Swastika - Oxford Playscripts 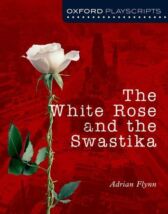 Large Mixed Cast
Tense drama based on the true story of a small group of students in Nazi Germany, who try to fight back against the government, despite the terrifying odds against them

Centred on brother and sister Hans and Sophie Scholl, it shows how their initial enthusiasm for Hitler and the Nazi regime turns to resistance ...

If the Gestapo find out who is responsible, they will undoubtedly be killed

As the leaflets appear far and wide, dissent begins to spread among students

The White Rose, is determined to oppose Hitler at all costs - but where will it end?

The Oxford Playscripts series offers exciting and skilful adaptations of a range of major novels and also includes ...

* Activities include work on Speaking and Listening, close text analysis and the structure of playscripts, and as a springboard for personal writing

* Insights into the plays from their distinguished authors and adapters