The Warrior Queen - Boudica and the Romans - PERFORMANCE PACK 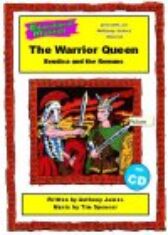 Large Mixed Cast
A Celtic storyteller and the Roman historian Tacitus recount the story of the Warrior Queen, Boudica ...

After her husband's death, Boudica is beaten and her people mistreated by the Romans

Calling on the ancient Iceni God, Andraste, she leads a revolt against the Romans, destroying three cities

The desperate Roman leader, Suetonius, must stop the revolt before the Romans are forced to leave Britain

After a great battle, Boudica's army is destroyed and to avoid capture she takes poison

All is not lost however, and - with the help of the Celtic God Andraste - Boudica sees her rebellion forge a new relationship between the Roman invaders and original Britons and a new era of peace begin

The Warrior Queen is a fictional story accurately based on the historical facts and spiritual beliefs of both the Celts and Romans. Created specifically for children this is a musical that allows children to learn about both cultures

Although Boudica takes poison at the end of the story, it is her defiance that helps both the Celts and the Romans to live and work together, and the Finale credits Boudica for creating a time of peace and prosperity for Britain