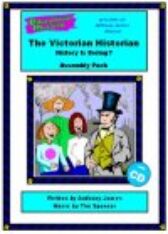 The Victorian Historian is the story of a journey through time, back to an epic age of industrial progress and invention. Two children find a strange machine in the house of their eccentric history teacher Miss Smith

Accidentally activating the machine the children, along with Miss Smith, are transported through time to Victorian Britain. Losing part of the machine to an unscrupulous and dangerous Victorian villain they set off to find a way back to the present day, meeting the machine's mysterious inventor and even Queen Victoria herself

Will the children and their teacher find a way to return to the present or will they end up trapped in time?

The Victorian Historian is a musical based accurately on historical fact and created specifically for children, with a musical accompaniment that will have you singing the songs for weeks after the show itself