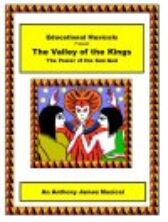 The musical also includes insights into the beliefs and gods of the ancient Egyptians and the valley of the kings ...

Two young girls touring Egypt visit the tomb of Anherkhau in the famous Valley of the Kings. Here they are magically transported back through time by their tour guide to meet Anherkhau, tomb builder to the Pharaohs themselves, and his son Kenna

The two schoolgirls help the tomb builder and the protector of the Valley the great Cobra goddess Meretseger, to defeat two devious tomb robbers from plundering the Valley. They are rewarded for their efforts when three of the most famous Pharaohs of Egypt visit them from the Afterlife to express their gratitude