The Urban Girl's Guide to Camping and Other Plays 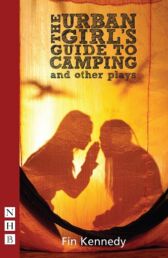 Tender, uncompromising, haunting and lyrical, these four plays together comprise a contemporary chronicle of the lives of East London's young women

The plays in this volume are ...

Four young friends leave the city behind and head into the wilderness, but a burning secret threatens to tear their lives apart. A bittersweet comedy about life, love and friendship once school is long gone

A touching family tale about resentment and forgiveness on the night before a wedding, exploring the pleasures and pains of a cross-cultural identity in twenty-first century Britain

Stolen Secrets are urban fairytales, bold, lyrical and gruesome, that can be performed individually or together for maximum shock value

In a fabric shop, a dying mother challenges her daughters to weave her the greatest tale, using nothing more than pieces of cloth. A Fringe First Award-winning fable about the power of mythology to change your life

Originally performed by the school at the Edinburgh Festival Fringe and at Southwark Playhouse, London, they are written in an ensemble storytelling style that will suit younger performance groups around the country, especially those looking for predominantly female roles

"To say Fin Kennedy and Mulberry School for Girls are one of the best writer/education partnerships there is doesn't do them justice. To say they're one of the best companies at the Fringe comes closer" ~ Scotsman