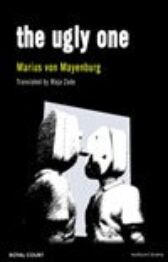 Lette thought he was normal, but when the extent of his ugliness is revealed to him, he turns to a plastic surgeon for help

And after the bandages come off, Lette soon learns that there is such a thing as too beautiful

The Ugly One is a scalpel-sharp comedy on beauty, identity and getting ahead in life

The play is published as a programme text edition to coincide with its British premiere at the Royal Court Theatre, London, on 13 September 2007