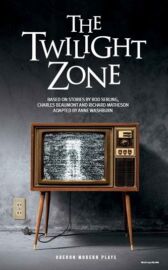 "What you are about to watch is a nightmare. It is not meant to be prophetic, it need not happen, it's the fervent and urgent prayer of all men of good will that it never shall happen. But in this place, in this moment, it does happen. This is the Twilight Zone"

In this skillful Adaptation, the acclaimed CBS Television Series lands on stage for the first time

A dimension we call The Twilight Zone

Anne Washburn weaves eight of the original CBS episodes into a single play, framed by the classic Will The Real Martian Please Stand Up? ...

Two police officers investigating a UFO sighting arrive at a local diner where they meet seven stranded bus passengers, all of whom claim to be from Earth

But one of them is lying

The final narrative dates from 1961 shortly before the Cuban missile crisis, in which an impending nuclear attack leads to an outbreak of suburban hostility, chillingly anticipating the kind of arguments about national identity that have resurfaced under President Trump

And When the Sky Was Opened

Three astronauts return from the first manned space flight aboard the experimental ship X:20. One by one, they begin to disappear

Eye of the Beholder

A woman lies in a hospital, having undergone an eleventh operation to 'fix' her face to prevent her being exiled. Completely covered by bandages, she waits to see if the operation has been successful

A small girl's parents are woken in the middle of the night by their daughter's cries. After struggling to find her they call a friend who discovers their daughter has fallen into another dimension

Before leaving for his latest mission, astronaut Doulas Stansfield falls in love with his colleague. He decides to forego the suspended animation machine that will prevent him from aging on the trip, so that they can age at the same rate despite being apart. But as he returns to Earth we discover the sacrifices made for love

Nightmare As A Child

A teacher meets a young girl outside her apartment who seems oddly familiar. After inviting her in, it is revealed that the girl is herself as a child, who slowly uncovers an important memory from her past

A man believes that if he falls asleep, a woman who stalks his dreams will kill him

An impending nuclear attack leads to an outbreak of suburban hostility

★★★★ "The energy, ambition and attainment of this terrific adaptation of stories from the eponymous classic 1960s American television series ... will delight fans of the original and welcome in newcomers too, which is no mean feat ... A classy Christmas and, I suspect, far beyond treat" ~ Evening Standard

★★★★ "This isn't a show just for fans, but it definitely acknowledges them. It's a loving pastiche, fully alert to the swirl of cultural inheritances that come with the show and its era ... a playfully great piece of theatre about the power of imagination: about how people use storytelling, particularly science fiction, to navigate new frontiers and question society. There's a good reason that theme tune lingers" ~ The Stage

★★★★ "A glorious exercise in sci-fi kitsch with a few smart lessons about the present ... the real knockout scene is a reworking of 1961's The Bunker ... basically the current battle or the soul of America distilled into a bleakly comic 15-minute playlet" ~ Time Out