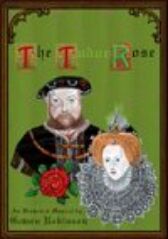 The Tudor Rose is set out as a musical play in two acts. A Narrator links the events in between sections giving an historical backdrop to each scene

Act 1 concerns the life and times of Henry VIII from his childhood until his death in 1547.

The main events in his life are remembered by the ageing, bad tempered King and are re-enacted through song including his triumphs in battle

Act 2 portrays the events leading up to the invasion of the Spanish Armada in 1588. The action is split between Spain and England as Elizabeth I, Lord Howard and Sir Francis Drake plot to defeat Philip II and his chief naval commander Duke Medina Sidonia

Each act is preceded by a song leading up to the events of the story. All the songs can be sung by a separate choir while the action is self contained A CD of Backing Tacks and Vocals is available separately Age Guide 7-11 Duration - About 60 minutes.