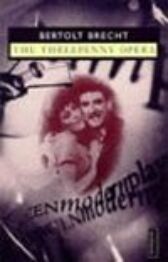 Based on John Gay's eighteenth century Beggar's Opera, The Threepenny Opera, first staged in 1928 at the Theater am Schiffbauerdamm in Berlin (now the home of the Berliner Ensemble), is a vicious satire on the bourgeois capitalist society of the Weimar Republic, but set in a mock-Victorian Soho

"One of the greatest poets and dramatists of our century" (Observer)