The Three Musketeers - A Comedy Adventure 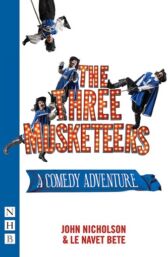 Armed only with a baguette, D'Artagnan travels to Paris to become a musketeer

Will things go to plan?

After discovering that the musketeers have been disbanded, he makes it his mission to get them reinstated

But will his feud with Milady de Winter thwart him?

And who the heck is she anyway?

This swashbuckling and rollicking adventure will suit any theatre company or drama group looking for a funny, high-energy adaptation of a universally loved story, which is suitable for audiences of all ages

Expect mayhem, calamity and hilarity for all the family

"A beautifully realised piece of work ... enormous fun and full of quirkiness ... a joyful, slightly bonkers, artistically clever and accomplished piece of theatre ... a visual and aural feast" ~ ReviewsGate