The Theatre of Tennessee Williams Volume 3 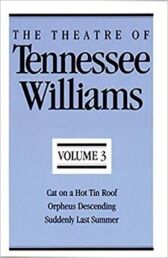 The first, which won both the Pulitzer Prize and Drama Critics Award, has proved every bit as successful as William’s earlier A Streetcar Named Desire

The other two plays, though different in kind, both have something of the quality of Greek tragedy in 20th-century settings, bringing about catharsis through ritual death