The Theatre of Tennessee Williams Volume 2 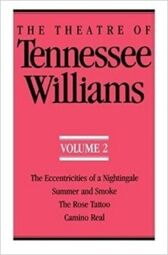 In this volume The Eccentricities of a Nightingale, a play in three acts, was intended as an alternate to Summer and Smoke, but was never produced on Broadway

These two versions of the same play introduce Volume 2

They are followed by The Rose Tattoo, an exploration of love and death in a Sicilian fishing community on the American Gulf Coast, and Camino Real, a unique work of symbolism and fantasy that creates a mythic landscape of beauty and horror