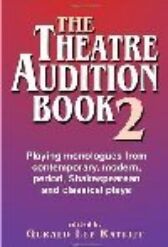 This sequel to the popular The Theatre Audition Book features more than 130 monologues from classical, Shakespeare, period, modern, and contemporary plays and a new chapter on musical theatre and the medium, including commercial and film auditions

This is Book Two, for The Theatre Audition Book One click here