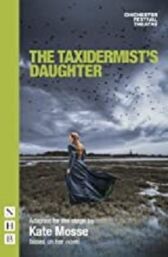 In an isolated house on the Sussex salt marshes, Connie Gifford lives with her father

Robbed of her childhood memories by a mysterious accident, she is haunted by fitful glimpses of her past – whilst her father has become a broken man, taking refuge in the bottle, since the closure of his once-legendary Museum of Avian Taxidermy

A strange woman has been seen in the graveyard – and a few miles away, two patients have, inexplicably, disappeared from the local asylum

As a major storm hits the coastline, old wounds are about to be opened as one woman, intent on revenge, attempts to liberate another from the horrifying crimes of the past

The Taxidermist’s Daughter is a thrilling Gothic story of violence, retribution and justice, adapted for the stage by Kate Mosse from her own internationally best-selling novel, and first performed at Chichester Festival Theatre in 2022

"Mosse's adaptation of her blood-soaked novel delivers on chills" ~ Guardian

"Atmospheric and riveting... There are surprises and shocks at every turn" ~ British Theatre Guide

"Dark but thrilling" ~ Everything Theatre