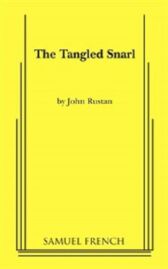 To Private Detective Spuds Idaho, life in L.A. is a 24 hour race around a track made of quicksand

When the dying Legs Flamingo leaves him a package to deliver, Spuds gets curious

Why is Leslie Detweiler more interested in the package than in the death of her husband: "Excuse me, but you look pretty collected for a lady whose breadwinner just got sliced four ways"

Why was Legs mixed up with mob figure Vito "Fingers" Scampi: "So Fingers had Legs under this thumb."

And how did it figure in with the Krieger heist: "The Commissioner was embarrassed. His boys in blue were red in the face"

With the aid of his secretary, Ginny, and a wise cracking kid, it all untangles for Spuds Idaho in this one act comedy