The Tallest Tale Ever Told 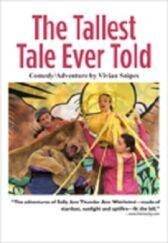 Take a journey of discovery to a simpler, earlier time of possibility and promise when amazing men and women accomplished astounding adventures!

This highly theatrical tall tale is a narrative based in fact

If it didn't, it wouldn't be a Tall Tale

So let the thunder roll, lightning strike and the rain storm as Davy Crockett bursts to life saving the world from imminent destruction

When the sun gets stuck between two mountains, Davy will grab Bartholomew Bear by the fur, tossing him to and fro

And releasing the sun

Because now the most fateful day arrives ...

Kissed by the sun and made of stars and sunshine, she can out-run, out-fish, and out-wrestle all nine of her brothers - played by one actor or nine!

But when she's relegated to "women's work", Sally Ann dreams of discovering her true destiny

Using her wits and wiles, Sally Ann survives the seasons and befriends many animals along the way

Known for digging herself a mammoth cave, clearing the Cumberland Gap and defending her fabulous pies from hungry alligators, Sally Ann becomes renowned for her selfless heart and heroic actions

She can and she will change the world for the better - one action at a time!