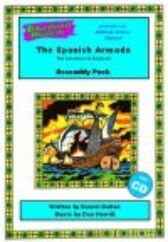 In the late sixteenth century, two European navies were dominant, the English and the Spanish. After many skirmishes in the Americas, Spain's King Phillip eventually assembled and launched a huge Armada of warships

Their target was England. King Phillip had an elaborate plan to send the Armada into the English Channel and to pick up soldiers who were waiting in the Netherlands, but Queen Elizabeth, Francis Drake and the English navy were waiting for them

Although created as a musical, The Spanish Armada is a fictional story accurately based on the historical facts known about the Armada. At the end of the musical some of the Spanish are marooned in Ireland with no way to return home and this will help children to understand that wars are not always glamorous