The Spanish Armada - The Invasion of England - PERFORMANCE PACK 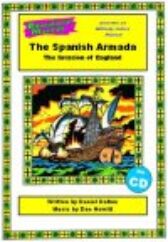 Large Mixed Cast
In the late sixteenth century, two European navies were dominant, the English and the Spanish

After many skirmishes in the Americas, Spain's King Phillip eventually assembled and launched a huge Armada of warships

And their target was England

King Phillip's plan was to send the Armada into the English Channel and to pick up soldiers who were waiting in the Netherlands, but Queen Elizabeth, Francis Drake and the English navy were waiting for them ...

Although created as a musical, The Spanish Armada is a fictional story accurately based on the historical facts known about the Armada