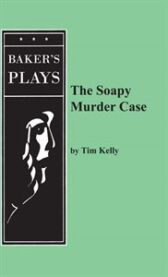 Life in a soap opera meets life in a New York City penthouse with hysterical results!

Old Horatio Tucker, sponsor of television's most popular daytime soap, "The Best Tears of Our Lives", has received an anonymous note telling him that the clue to his killer can be found in the next day's episode

Things become woefully muddled when a nasty network executive, Ivy Medea Robespierre, is done to death with a thumbtack, Dr Brock Rittenhouse is discovered stuffed up the fireplace chimney, and old man Tucker is dispatched via a bowl of chicken soup

With characters slipping in and out of their television roles, and plastic surgeons, welfare cheaters, theatrical hams and assorted zanies running loose, the stage becomes wonderfully, hysterically dizzy