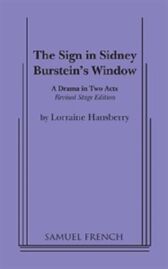 From the author of A Raisin in the Sun, this is the probing, hilarious and provocative story of a disenchanted Greenwich Village intellectual, his wife (an aspiring actress) and their colorful circle of friends and relations

Set against the shenanigans of a stormy political campaign, the play follows its characters in their unorthodox quests for meaningful lives in an age of corruption, alienation and cynicism

With compassion, fire, humor and poignancy, the author examines questions concerning the fragility of love, morality and ethics, interracial relationships, drugs, rebellion, conformity and especially withdrawal from or commitment to the world

"Shines with humor, trembles with feeling and summons up a vision of wisdom and integrity" ~ N.Y. Times

When Lorraine Hansberry's A Raisin in the Sun appeared on Broadway in 1959, the artist became at twenty-nine the youngest American playwright, the fifth woman, and the only African American to date to win the New York Drama Critics Circle Award for Best Play of the Year

And its vivid demonstration of so gifted a creator, cast, and director, made it impossible for the American stage to ignore African American creativity and subject matter thereafter

In 1961, the film version won a special award at the Cannes Film Festival and was nominated for a Screen Writer's Guild Award for Hansberry's screenplay