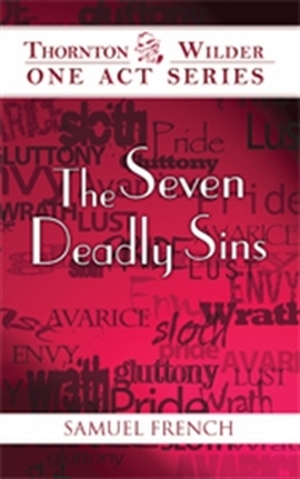 Published for the first time in a single acting edition, Wilder's The Seven Deadly Sins presents a series of short works depicting the complexity and consequences of human frailty

The Seven One-act Plays are ...

Apollo ventures into the land of the three sisters of Fate who control the threads of each man's life, and here in disguise he tricks the sisters into releasing their death hold on King Admetus

Set in Chicago in 1911. Walbeck, a thoroughly hated man who cheated hundreds of people out of their money, suddenly returns home from Joliet prison when his sentence is reduced

This sudden gift of a large sum of money prompts Herb Hawkins to question the meaning and purpose of his own life. He returns to his place in the family with touches of humor, irony and despair

A Ringing of Doorbells (Envy) - F4

A mother-daughter team of con-artists are putting the touch on the widows of military brass. Mrs McCullem - housekeeper for the wonderfully regal but now wheel chair-bound window of General Beattie, recognizes them in the drug store. But instead of turning them over to the police, the widow Beattie allows the game to be played ...

In Shakespeare and the Bible (Wrath) - M1,F3

The year is 1898 and the place is an over-sumptuous parlor in New York. Mrs Mowbrey, a mature, wealthy woman with a history to bury, makes a plan - she'll befriend her estranged niece and fiancé, and their subsequent marriage will provide her own entre into respectable society. Or at least, that's what she tells the young couple ...

Saint Francis, almost blind and toothless and nearing the end of his life, revisits Assisi, where he encounters Mona Lucrezia - now a mad woman - with whom he had a love affair when he was a wild, willful young man and she was a young married woman