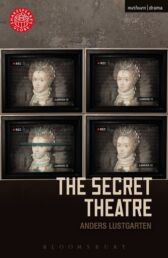 "It's not enough that men are watched;
they must think themselves watched,
even when they are not"

As the nation's relationship with Europe deteriorates and civil unrest grows, Walsingham adopts ever more extreme tactics to keep his queen and country safe

But does he risk losing control of the apparatus he has created and destroying the lives of those closest to him?

And can such safety ever be achieved?

Shot through with moments of the blackest humour, this smart, tense thriller has been published to coincide with the world premiere at the Sam Wanamaker Globe Playhouse, November 2017