The Saxon King - The Story of Sutton Hoo - PERFORMANCE PACK 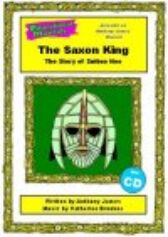 Large Mixed Cast
On the eve of the Second World War, Mrs Edith Pretty witnesses a phantom army battling in the sky above her land

She sets out to discover just what is buried under Sutton Hoo, discovering a long forgotten king's treasure

This is a fictional story based on the Anglo-Saxon treasures discovered at Sutton Hoo in 1939, and Bede's story of King Edwin and King Readwald's alliance against King Ethelfrid as he wrote in Bede's Ecclesiastical History of the English People

It's so Hard to be the King