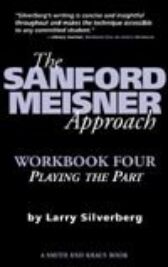 From around the world, the critics have raved about Larry Silverberg's series on the Meisner Approach This is the Fourth Book in the series, offering ...

For the other three Volumes in the Series, click here