The Rules of Acting 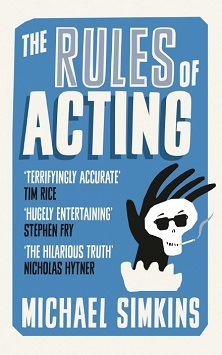 Who’d be an actor?

Michael Simkins isn’t sure, even though he’s been one himself for over thirty years

Join him backstage as he examines that business we call showbusiness

He shares everything you need to know ...

And from Shakespeare to flatulence ads

"Throw out An Actor Prepares! Michael Simkins' book tells actors all they need to know about the realities of the acting profession; the passion, the struggle, the noble idealism and the heartache" ~ Helen Mirren

In a career that started as a plump teenager in ballet tights at RADA, Michael has appeared in countless West End plays and musicals, presented safety training workshops for sewage workers, and when resting, worked as a crate smasher at a car factory

He’s done movies, soaps, ads, and voice-overs, and worked with everyone from Meryl Streep to Kelly Osbourne

Covering everything from learning your lines to tilting for Oscar success in Hollywood, surviving a flop, to why it’s advisable to read the whole script if you wish to avoid improper relations with a pig, it’s the ultimate survival guide for anyone contemplating a life in showbiz

Could be the perfect gift for the thespian in your life ...