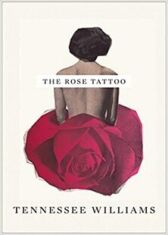 The Rose Tattoo is larger than life - a fable, a Greek tragedy, a comedy, a melodrama

Professional widow and dressmaker Serafina delle Rosa has withdrawn from the world, locking away her heart and her sixteen-year-old daughter Rosa

Then one day a man with the sexy body of her late Sicilian husband and the face of a village idiot, Mangiacavallo (Italian for “eat a horse”), stumbles into her life and clumsily unlocks Serafina’s fiery anger, sense of betrayal, pride, wit, passion, and eventually her capacious love

The original production of The Rose Tattoo won Tony Awards for best play and for the stars, Eli Wallach and Maureen Stapleton

Anna Magnani received the Academy Award as Best Actress for the 1955 film version.

This edition of The Rose Tattoo has an Introduction by playwright John Patrick Shanley, the author’s original foreword and the one-act play The Dog Enchanted by the Divine View that was the germ for the play