The Prince of Homburg 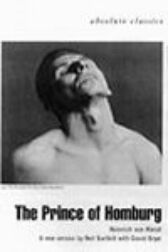 The night before he leads his troops into battle, the Prince of Homburg strips off his uniform and goes sleepwalking

Moonstruck, his mind races with a young man's fantasies - love, ambition and victory

But when the morning comes, a single reckless act of disobediance sets in motion a chain of events that leads inexorable to the one thing he never dreamt would happen - his own death

Driven to suicide at the age of 34, he left behind him seven extraordinary plays