The Playwright as Rebel - Essays in Theatre History 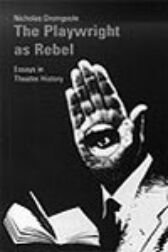 What was it about ancient Greece, Elizabethan England and Racine's seventeenth-century France that made them particularly able to respond to and create the high points in tragic drama?

Where do Molière's comedies spring from? Why was the Romantic Movement such a watershed in our cultural history, and why was Schiller so handicapped when he attempted to write tragedies?

Why was the theatre so despised in England in the eighteenth and nineteenth centuries?

In addition, by setting them in their cultural and historical context, he attempts to answer these wider questions, and to demonstrate that theatre plays a key part in disseminating ideas, attitudes and assumptions at crucial moments of social and ideological change.