The Plague (after La Peste) 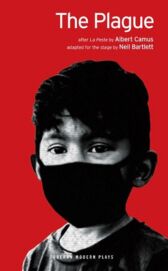 It was an immediate best-seller, striking a powerful chord with readers who were struggling to understand the fascist 'plague' that had just overwhelmed Europe

Using just five actors, his frank and gripping new stage version uses Camus' original words to put chaos under the microscope and to find hope in the power of our common humanity

★★★★ "Bartlett's best move is to commit to the story in its own right. He takes the plague seriously and, rather than underlining the allegory, pointing out some parallel or other, he lets it breath. As a result, the epidemic is many things at once: rising xenophobia and contagious radicalism, economic collapse and an influx of refugees and, yes, even an actual epidemic. It's any danger that catches us off-guard, slips through the net and spreads through society. It sits, perfectly, with the air of anxiety and Bartlett's production has an itchy urgency that both grips and unsettles" ~ What's On Stage

★★★★ "Neil Bartlett has adapted and directed it with great ingenuity, expanding the novel's technique of multiple narration... Bartlett's version takes place in an unspecified locale and begins with a public enquiry into a disaster that has overtaken a perfectly average city ... It is a chilling fable and, like Camus, Bartlett is fascinated by how people react to a crisis ... Theatrically, it is highly effective ... I don't think one can entirely ignore the work's origins, but it here becomes a modern myth" ~ Michael Billington, The Guardian

★★★★ "Neil Bartlett's stage version of Camus' 1947 novel is all the more devastating because it takes material the outbreak and progress of a disease that threatens to engulf a country the author's Oran, Algeria and subjects it to a studiedly unsensationalised treatment. The novel was immediately hailed, when published, as a bold allegory about Nazi occupation. But Bartlett's other master-stroke is to present the story in such a spare, minimalist fashion that it is seems to be applicable to everything from Ebola to Syria and Brexit" ~ Independent

★★★★ "A harrowing exploration of the human condition and how we behave in the time of a crisis, The Plague at Arcola Theatre is not to be missed ... Sticking close to the original text, Bartlett effortlessly translates the symbolism on to the stage, allowing us to find new meanings in our own dark and dangerous times. Indeed, themes of frustration with the system, media rhetoric and moral obligation may hit a little close to home at times. Making light work of a weighty allegorical tome, The Plague makes Camus accessible to new audiences and teaches us that, in the fight to survive at all costs, hope and unity are key" ~ The Upcoming